How to Read Labels 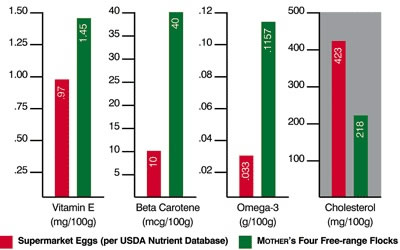 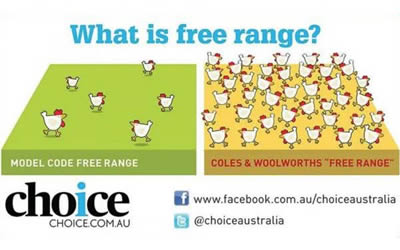 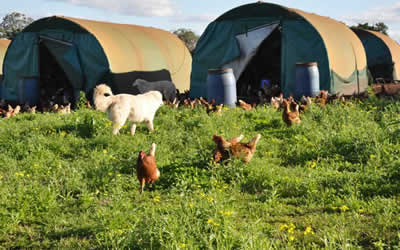 The Organigrow Eco Shelters, house an average of 250 hens. The Shelters are located on a large fenced area which is opened up all day to allow our hens onto the surrounding prairies where they also find plenty of shade. 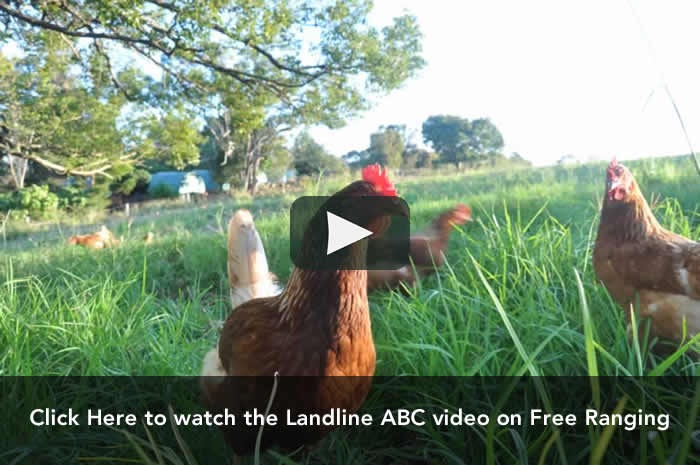 To find out the difference between caged, barn, free range and organic eggs, please download the file below.

Only free range hens can be used to produce certified organic eggs and meat and must be grown without the use of artificial colours and synthetic chemicals, according to the national standards. Birds are fed certified organic feed grown from soil that is certified as organic and does not contain pesticides or inorganic fertilisers. Under the regulations, no antibiotic medication is to be used for treatment of organic poultry. Organic standards for egg production specify the types of feed, accommodation, and living conditions which are suitable for organic laying hens. While healthy hens require shelter for security and protection against the elements, they also benefit from the freedom to scratch and forage naturally outdoors. A clean, pollution free range provides a suitably varied natural diet, one that is rich in essential vitamins, minerals, and trace elements.

Certified organic chickens have two additional requirements as well as having to be free range:

Certified organic eggs bear a certification logo from an approved organisation, and producers must comply with The National Standard for Organic and Bio-Dynamic Produce. Eggs can be legally sold as ‘organic’ without being certified by an organic association. Therefore it is important to look for a relevant certification to ensure that the production complies with the relevant standards.

Currently, there are 1.69 million free-range hens in Australia (close to half of the total laying hens in Australia) with an estimated grocery market share of 45%. Free range eggs are worth 54% of the value of retail egg sales, which is more than $400 million a year.

Under the Model Code of Practice for the Welfare of Animals (domestic fowl), free range allows poultry access to the outside.

There is no one free range standard nor is a producer required to be certified or part of any voluntary association. Hens are housed in a shed but allowed access to the outside. Feed and potable water points are available within the shed housing which is in accordance with Bio-security regulations. Beak trimming is acceptable when carried out by accredited personnel only when all other treatments have been exhausted and must be initiated under veterinary instructions. In most but not all free range system beak trimming at day-old is not adopted. There is no restriction on what the hens are fed, except some standards state ‘natural’- whatever that means. Hens may be fed animal products and medicated as well as fed/dosed with insecticides.

If Organigrow chooses to use the draft AECL standards, this means we could under these standards- have 75,000 to 112,500 laying hens on our farm. They could be housed in sheds from 2,500 to 20,000 each shed. This would be perfectly okay in a free range farm depending on what standard the farmer choses to apply.

The Barn poultry layer system is sandwiched between the cage system and free range system. Barn hens are housed on deep litter in secure and weatherproof sheds. While they are provided with ample water, feed, ventilation, space and nesting boxes in accordance with the Model Code of Practice for the Welfare of Animals (domestic farm), they do not range out of doors.  Hens have access to a private, enclosed area for laying, which is a priority for hens. Beak trimming is generally allowed with most bird’s beaks trimmed at day-old to limit feather pecking and cannibalism. Barn sheds are usually fully automated with central nesting boxes over conveyor belts which carry the eggs out of the shed into a packing area, thus avoiding human contact. Hens may be fed animal products and medicated as well as fed/dosed with insecticides. 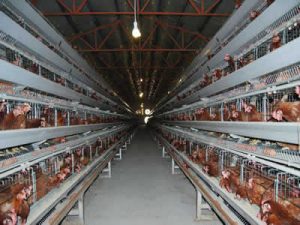 In Australia there are regulations for poultry cages that need to be adhered to and some recent changes came into effect from 1st January 2008. They are based on the Model Code of Practice for the Welfare of Animals – Domestic Poultry 4th Edition (2001) (2001 Code). Parts or all of the 2001 Code may be regulated in each State or Territory or else it is made a requirement that poultry farms comply with the 2001 Code.

At the Agriculture and Resource Management Council of Australia and New Zealand (ARMCANZ) meeting in 2000, the only states opting to abolish battery cages were Tasmania, Queensland and ACT while New South Wales and Victoria opposed it for economical reasons. Eventually, the Council didn’t decide to abolish battery cages but, on the contrary, guaranteed that battery cages may continue to be used for up to 20 years after their installation. The only change effective from 2008 was that very old batteries will have to be replaced and newly constructed batteries will have a slightly enlarged minimum area of 550 cm2 per hen.

Table 1 shows a summary of the most important parameters of the 2001 code for poultry cages in Australia. The poultry cage standards prior to 2001 are also shown as a comparison.

FROM A WEB SITE called –NOCAGED EGGS (as an egg producer, we can state that the following observations are valid) 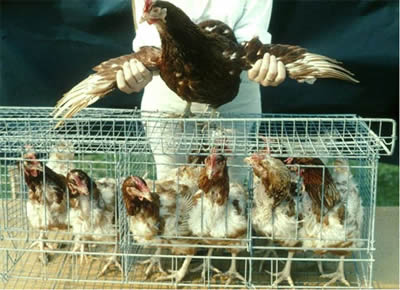 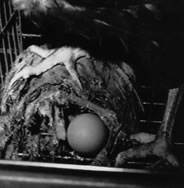 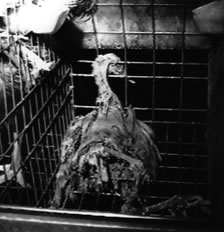 A caged hen’s claws can grow so long that they curl around the wire floor making movement impossible. The hen then starves to death.

FEED – WHAT IS ALLOWED UNDER CAGE, BARN AND FREE RANGE EGGS-BUT NOT ORGANIC 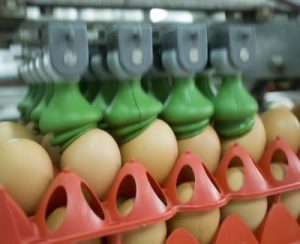 The animal industry evolved as a means of adding value (i.e. higher nutrient level and availability, flavour, variety, etc.) to ingredients that were of marginal food value for humans. These ingredients include grains that are of poor quality or damaged by harvest or storage conditions; and, as a meansof recycling, by-products of brewing, vegetable oil, meat, milk and egg production. Approximately 50% of the live market weight of ruminants and 30% of poultry is by-product. These by-products arerendered, ground and available as a feed source. This fact sheet will discuss the issues and opportunities associated with recycling animal protein meals through poultry in the production of meat, eggs and bioproducts.

Animal protein meals are usually defined by inputs, those specifically used in poultry diets include: meat (no bone) or meat and bone meal (from ruminants and/or swine); blood meal; poultry by-product meal; feather meal; and fish meal. There are specific limitations now assigned to these products with regards to inputs used and guarantees with respect to minimum nutrient levels. For example meat and bone meal may be specifically from ruminants and must be free of hair, wool and hide trimmings, except where it is naturally adhering to heads and hoofs. The products are all rendered which is a biosecure process that evaporates water, extracts fat and yields a finished ground product high in protein (which has no resemblance to the raw product) and minerals. The products are marketed with guarantees as to minimum protein, phosphorus and calcium levels.

Food safety is the most important concern people have about the recycling of animal protein meals back through animals as feed ingredients, and this is based on possible (i.e. not medically proven) links between bovine spongiform encephalopathy (BSE – mad cow disease) and a new variant Creutzfeldt-Jakob disease in humans. The proteins (prions) associated with BSE are not destroyed by traditional methods of rendering and are capable of causing the disease when contaminated meat and bone meals are injected cerebrally into ruminants (but not when provided in feed under laboratory conditions). Researchers have been unable to demonstrate the transfer of prions to poultry and no symptoms of disease have been observed in birds up to five years after direct challenges.

As a consequence of the public’s concerns about BSE, Australia has banned the feeding of ruminant by-product back to ruminants; however, this product is available to the poultry industry. The Australian cattle and sheep industry has adopted this practice even though Australia is free of BSE and all other transmissible spongiform encephalopathy such as Scrapie and Chronic Wasting Disease (Aird and Spragg, 2003).

Further to BSE are concerns that animal protein meals are responsible for food borne pathogen contamination, such as Salmonella. Typically these bacteria are destroyed by rendering and possible recontamination is often negated by pelleting of manufactured feeds. In most cases, if poultry acquire Salmonella it is likely to be from an environmental source other than feed. It is possible for animal protein meals to be contaminated with high levels of heavy metals, dioxins and PCBs (pesticides)

Quite apart from the colouring additives that most egg farms use in the feed they give to their hens, now farms are being urged to add a fly control agent, cyromazine to the feed. It is recommended to use it every day for four to six weeks, then break for a similar period before starting the cycle again.

Interestingly, manure from hens which have fed this insecticide, should not be spread on land used for growing vegetables at rates greater than four tonnes per hectare. 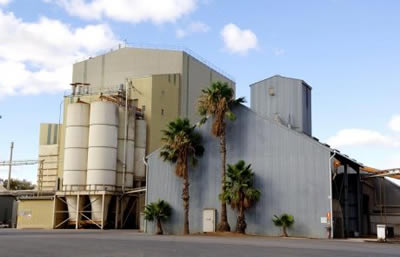 In 2011, the Australian Egg Corporation’s proposed standards for ‘free range’ egg production have met a barrage of opposition from the industry and consumers. The absurd proposal is more than just a question of the stocking density being raised from a maximum of 1500 birds per hectare to 10,000 – 20,000 per hectare.

Under the standards (if they are adopted) the young hens will be kept in semi-darkness within electric hot-wired sheds to prevent free roaming and to force them to lay eggs in nests on conveyor belts.

They will be locked in the sheds for the first 26 weeks of their lives to ensure they are set in their habits and are less likely to ever venture outside to forage.

As they can start laying at around 16 – 17 weeks, those eggs should certainly be called barn-laid, but they will be labelled as free range. They will be beak trimmed at one day old or soon after, which contravenes the Model Code of Practice for the Welfare of Animals – Domestic Poultry.

Once a hen is debeaked, it is all very well to let it outside, but it cannot eat grass or grubs properlt or at all .

If the weather is too hot, too cold, too wet or windy then the hens will be locked in the sheds because these conditions may cause extra work; for example, mud from dirty feet might clog the belt egg collection system, or having the doors open may interfere with air conditioning.

The proposed standards minimise human contact with the hens and are likely to have adverse effects on good animal husbandry practices and hen welfare.

If the factory farms do let their birds out, it will only be after the hens have finished laying – in the heat of the day. So why would a hen want to go out? They prefer the cool of the early morning and evening.

The de-beaking, or beak trimming of chicks is still widespread in Australia. It has been estimated that more than 95% of the hens in this country have been beak trimmed by hot blade or laser equipment.
Even most so-called ‘free range’ farms de-beak their birds – because they are intensive systems where the birds are confined. 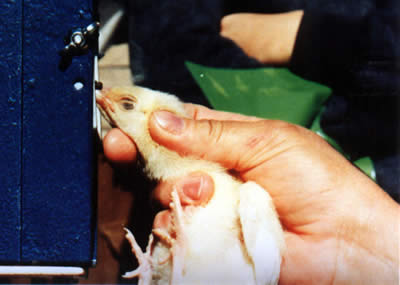 These standards are being proposed, not for the ‘improvement of standards’ as claimed by James Kellaway of the AECL, it is simply to facilitate the conversion of free-range egg production into a factory system.

These standards are being proposed, not for the ‘improvement of standards’ as claimed by James Kellaway of the AECL, it is simply to facilitate the conversion of free-range egg production into a factory system. 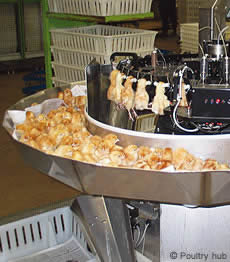 ORGANIGROW IS NOW ACCREDITED WITH THE HUMANE SOCIETY as being truly free range !